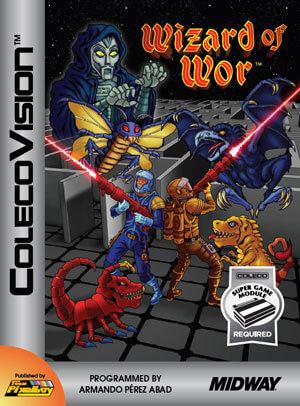 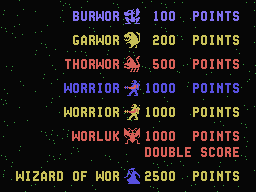 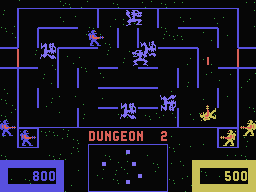 How long can you survive in the wizard's deadly maze?

The deadly game's origins remain shrouded in cosmic folklore, and indeed, only the Wizard himself could tell its true tale. For centuries, astronauts have been kidnapped randomly along the trade routes between solar systems, and thrown into the Wizard's space maze for his entertainment. Pitted against hordes of merciless monsters and also pitted against each other, the poor souls who were forced to fight for their lives never lived long enough to escape and tell the tale.

But now, you and your squadron of space marines are out to stop the Wizard once and for all. The problem is, the Wizard was ready for you, and captured your spaceship like all the others before you. Armed with laser rifles, your squadron may actually survive in the space maze long enough to impress the Wizard and draw him into the maze. But seeing the face of the Wizard of Wor may be the last thing you will ever see...

(ROM has been patched to work on the Collectorvision Phoenix)